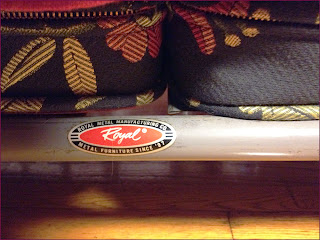 It's over! The couch/settee is here and I feel a void in my soul is now filled. Yeah an exaggeration, but this royalchrome soap opera is now at it's end and I quite frankly am happy about it.

As you all know this week I was anxiously awaiting the purchase of another royalchrome couch. The one that was lost by Greyhound was reimbursed (always get stuff insured!) and I got the payment for that a couple weeks ago.  I had found another settee on etsy and contacted the seller to see if she would brake up her set. She had two settees and two chairs. I really only wanted the settee, but she would only brake up the set if I got a chair as well. Fine. Getting both would still be cheaper than getting the settees I have found online. Some people were asking for $600-$800 for a love seat. That's stupid. 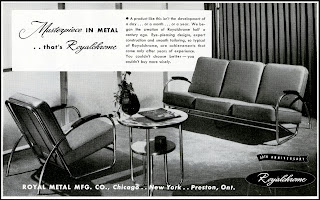 I made my offer and considering I didn't want the cushions, I thought my offer was a good one. She declined. No counter offer or anything. I was tired of looking for this piece of furniture, and my patience for the hunt was wearing thin, so I asked why my offer was declined. They said it was too low. I thought it was fair. I contacted them back and asked why no counter offer. I mean this is how it works, right? My query gave the opportunity of a counter offer that was a good 25% more than my offer. Geeze, I had to sit on that one. 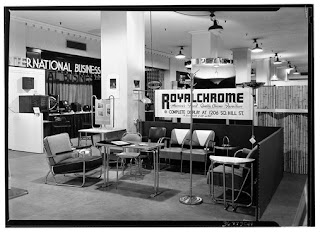 I think my yammering about Royalchrome has made them seem more valuable than they are. I mean, when I searched online for a replacement settee, my blog kept coming up at the top in the searches! I spent hours combing through royalchrome listings 6 years old, old images from dead sites, furniture places that would not return my emails. I mean really, who has a web store and does not check their emails!?

Later that week I received another message from the etsy seller. They had another offer on the set but wanted to give me first crack. I declined saying that I really only wanted the settee and was making my offer as a courtesy because they were willing to brake up the set. They were nice about it, no sour discourse on either of our parts, and I left the conversation sad. I really wanted that settee. Back to looking.

Then out of the blue I get another etsy message from the seller saying if my original offer was still valid, they would take it. YES! I paid in two installments and this afternoon as I was walking home from the grocery store, I see a man in a rental van wearing a FedEx uniform. I stop on the sidewalk and ask if that big box I saw him taking out of the truck was for a Shelley. He said yes. BITCHIN'! I said bring it on in! I walked with him into the building and he brought both boxes to my door. It was perfect timing! 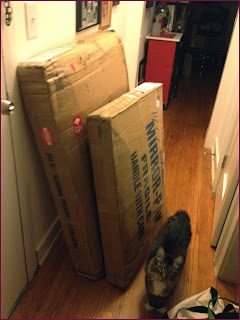 I cracked open the boxes and I was so impressed by how carefully the pieces were packaged. Wrapped,  taped with electrical tape (so not to stick to the chrome) and even slight 'instructions' on some of the slats. Really top notch job. I even emailed the seller and thanked her for the great packaging. 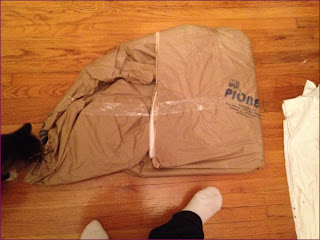 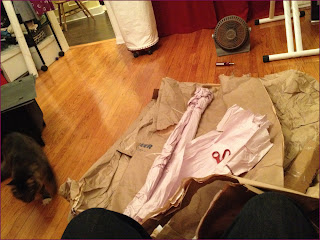 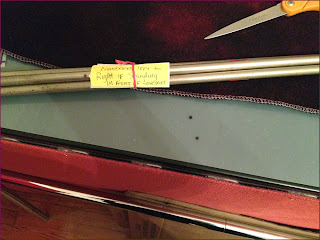 I do that when I buy something and the packaging is awesome.
I really appreciate that touch. 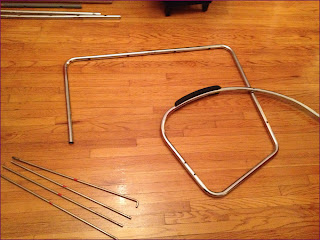 I had put one of these together before, so I was able to get this puppy up and in one piece in about an hour. I quickly grabbed the finished cushions from my bedroom and threw them on the finished frame. Then, the first sit.
AH!
Such sweet satisfaction. I basked in the completion then realized I had a chair as well. I was looking around the layout of the two settees, placing them in various positions in the living room until I realized I didn't like the layout. Well shit. I go through all this trouble, anguish and money and I don't like the layout. Man, for about 10 minutes, I felt stupid. I liked the openness of the living room  area, especially when I sew, and these settees have such a large footprint. What was I going to do? 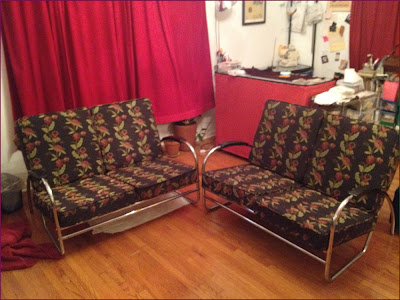 I put one settee in the bedroom. I want a place to read anyway and it being in there will make that space more desirable to me. Now I won't just use it for a big closet. I plan on putting the chair in the living room instead. I have it, might as well use it.

I am now at my max for furniture. I don't need anymore pieces, I now just want to replace a couple of items with different things, like the shelf that holds my fabric with vintage lockers. That is going to happen!

I also need a mattress. That's my next big purchase. I'm sure that will not be as big a drama as the Royalchome Chronicles. I'm so glad it's all over, and I am so happy with the aesthetic. My apartment is looking more vintage all the time! It's feeling like me!

Have a great Saturday. I know I will!!
at September 29, 2012
Email ThisBlogThis!Share to TwitterShare to FacebookShare to Pinterest
Labels: 1940, 1950, furniture, homemaking, royalchrome