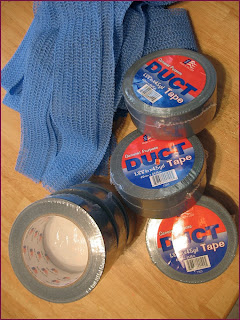 I did it, I made a duct tape dress form. Thanks to a lot of help from my friend Jen, who now knows more of my wobbly bits than she ever wanted, I managed to finally get this done. 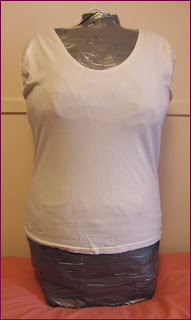 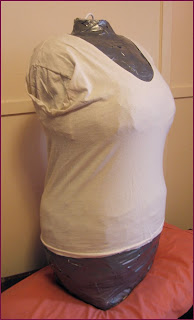 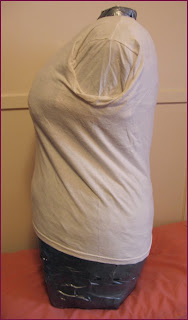 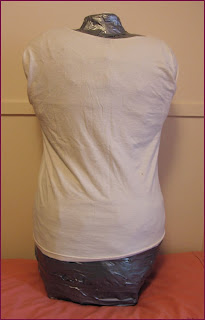 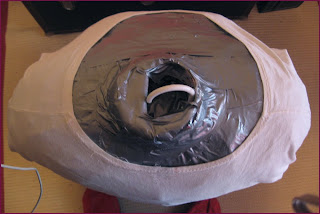 The whole thing cost 6 rolls of tape (two were used after the wrapping, and I still have one leftover), and two bags of packing peanuts. In sum a total of a few hours and $22. I put a hanger in the shoulders so I could hang the dress form up. 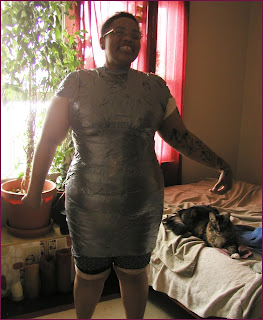 It was an interesting feeling as the tape built up, and me bending was out of the question. 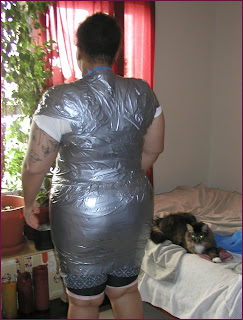 After Onda was cut off me, I spent the next day stuffing her and shaping her a bit. I had to pinch the waist, because we had to wrap tons around the middle. I also padded the hips some. Shes really, really close to my measurements at 48, 39, 51. The upper bust is a bit larger on her than me (42" Im 41"). I may layer her with a few shirts to give her some padding so shes squishy.

The name Onda comes from a life size doll I had as a kid. She was like a life size Barbie, about 4' 8" tall, chocolate brown, and wearing a jean shorts set! My older cousin was so impressed by the name Onda. I forget why I called her that, but I feel its time to bring it back.

Its strange seeing my body size not in the mirror. Ive dressed her in a few of my shirts, and she looks cuter than me. But she is me, right? Creepy...
at May 10, 2010
Email ThisBlogThis!Share to TwitterShare to FacebookShare to Pinterest
Labels: body, craft, dress form