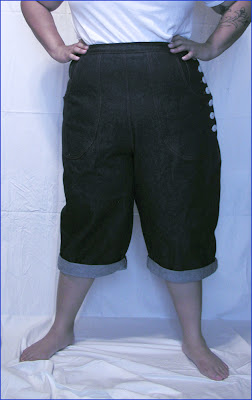 With the launch of Make and Mend 2011 I thought it would be a good time to introduce a new segment to my blog. I often get asked how I alter patterns for my figure. A lot of it is trail and error. It's sometimes costly time wise, but I have a habit of being a glutton for punishment. 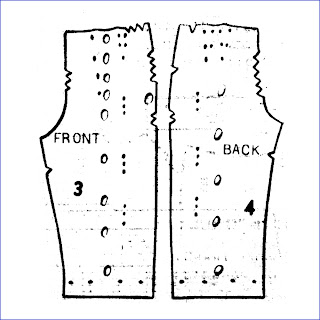 As a template I'm using the slacks that are from my repro pattern.
I can't tell you how many pairs of pants I've made that fit almost. By 'almost' I tend to mean that the seat is good, the legs are straight, but the crotch is just a bit too...what's the word...ouch?

I've added to the sides, changed the darts and done all that I thought I needed to do in order to make them sit straight. Then I decided to deepen the front seat. That worked sometimes and I attempted to deduce why. Then I realized it was all in the angles.

Meet my illustration body. I'll be using these as reference the entire month. I'm a visual person and I'll use any excuse to draw. 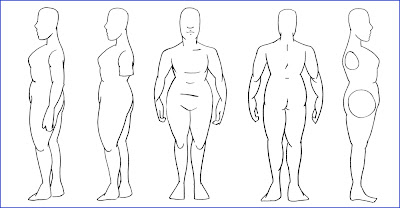 When I was thinking about why my slacks always had an inconsistent fit, I decided to look at the body I was fitting them to. Us gals with a extra weigh need to know that we have to often adjust our angles. We have become used to adding more for the bust, arms and waist, but more nuanced adjustments are often overlooked. Take the front of the slacks for instance.

Most slacks are not cut to adjust the extra weight we stout women often have in front. That seam presses against our abdomen and we often get a tight fit at the lower crotch. The key to this area is to give the ponch enough room so that area drapes straight down from the center a bit outward instead of from only from the center thigh. 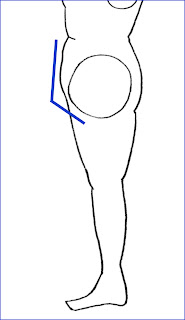 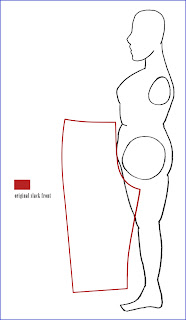 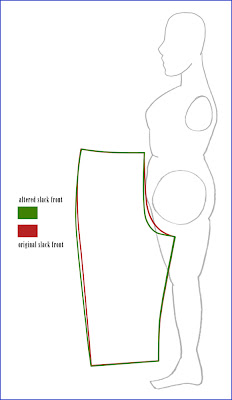 For me, I have remedied this by making a rather dramatic angle at the lower crotch. This way, when I fit the slacks to me, my belly is not pressing so dramatically against the curve at the crotch. To compensate for the inch or so that will be lost to the dramatic curve, you will have to add some to the lower hip to prevent more pulling. Of course these adjustments will vary depending on your own body. The best way I've found to check is a french curve. Simple, right? 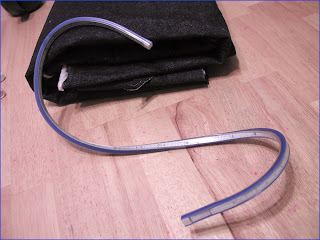 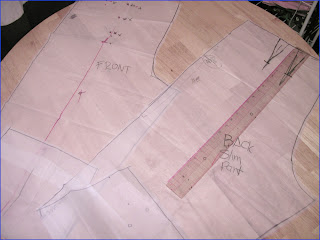 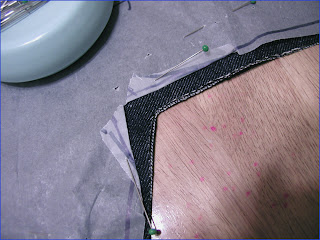 Here is a curve I made on a pair of slacks I've just  cut out. Its a bit more dramatic than what I normally do, but Im experimenting and the clamdiggers that I made recently (see above) turned out so well that I thought I'd try it.

Once you have that area of the body altered, you are going to want to check the front center darts and make sure that area, which is your straight of grain, actually is placed down the center of your leg. Here you can see the original dart placement (the black circles) and my alteration in magenta. This is really important if you are widening slacks. After than it's smooth sailing. 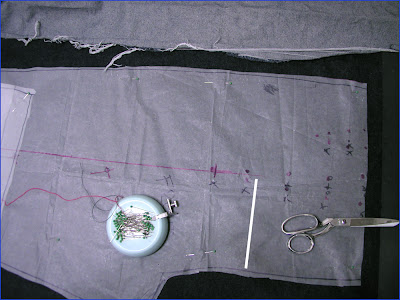 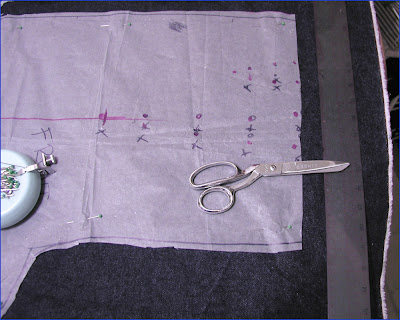 Simple, huh? I can't believe that it's that simple. Use the french curve to see how best your body fits with the alteration. Play with this with some muslin and soon you can have a master pattern for yourself. 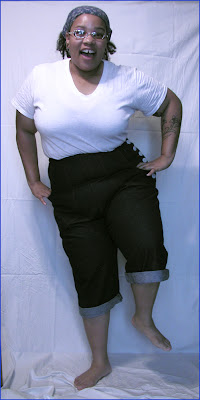 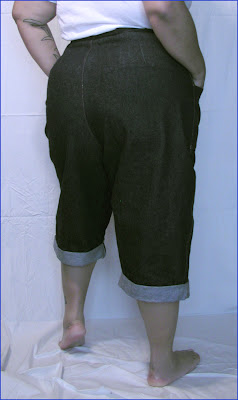 Welp that's about it for today. Thanks!
at May 30, 2011
Email ThisBlogThis!Share to TwitterShare to FacebookShare to Pinterest
Labels: 1940, denim, MnM11, pants, repro, SAT, teaching