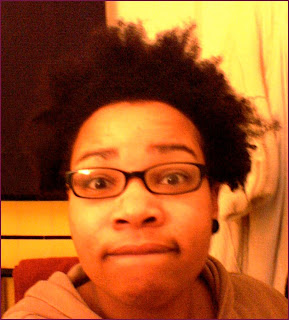 I was having a phone conversation with my nearly 90 year old Grandmother the other week and other than her consistently telling me I need to move back to Kentucky, she had a sound reason why I was in the job slump Im in.

"Do you still wear your hair like that," she asked.

"The way it grows out of my head?"

"Well, yes. You need to go to a black hair dress and get a perm. Then Im sure when you go for a job interview, you will look more presentable. You would be surprised how something like that would keep you back." I said thank you as I normally do when she says something insufferable and we ended the call.

Later that day, at the bus stop, I was approached by an older black woman, about late 40s, intrigued by my hair.

"Why do you have it covered up?" she asked. "You wear it natural, right?"

"I do," I replied. I had a bandanna on, mainly because my hair was pretty wild that day, but also I was just out running errands, and the wind was strong.

"What, are you ashamed of it?"

"I love my hair," I resounded. She was happy to hear me say that and we went on and had a good ten minute conversation about black hair.

"Black women are so broken when it comes to their hair," she said, and I couldn't have agreed more. 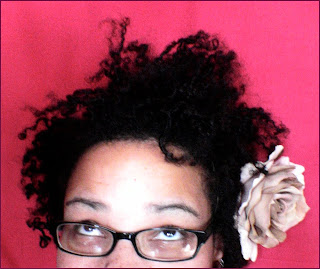 Let me reiterate.
I love my hair.
Not as in, 'I love the way my hair is styled today', or 'I love the cut I have this week', but, I love my hair. I love its texture, its color, its sheen, its body, its behavior, everything about it. And this love did not come easy, especially growing up as most black women do, with an instilled belief that your natural hair is wrong. 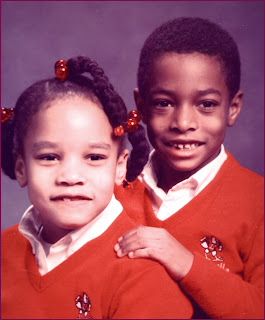 I got my first perm at about 8 years old. For people who dont know, a perm for black hair does the opposite of what a perm for white hair does. It makes it straight. The term 'relaxer' seems to be the new thing to say, but I grew up with all the hair dressers saying 'perm' so that is what Im going to say. 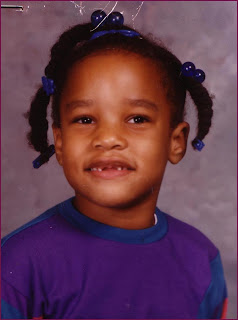 My mother did it for me with home kits, and I had so much hair that it often took two or even three (and those were the adult sizes). So I got a perm roughly every two months, and my hair was washed every two weeks.

The early years were the hot comb, and lets just say that a stove heated oily metal comb nearly singeing your scalp for three hours bi-weekly isn't too much of an improvement to having your scalp chemically burned by a white mayonnaise solution. But, thats what little black girls were subjected to. That is what we were told would make us pretty.

When I was about 12, and my mother got lazy, I didn't get my hair washed for nearly a month. The sides, in front of my ears started to thin, and then fall out. I lost a lot of hair on that washing, and I could tell my mother was a bit saddened by it. It was then that I thought, why do I have to go through this, why cant I wash my own hair?

When I was about 14, I was allowed to make some of my own hair decisions. By then I had a 'wave' or I guess if you are using 80s lingo, a jerry curl. It kept my hair and scalp constantly wet, musty, and ruined many a pillow case. Not to mention my face often broke out.

By 15, I started using less and less of that 'curl' solution, and i noticed my hair felt better. Soon I stopped using it at all, and just washed it and oiled my scalp (another black hair myth Ill get to later).

When I got to high school, I realized the way I had grown up with my hair didn't have to be the only way to wear my hair. I stopped putting stuff on it, and I started washing it and twisting it, and it grew. My sides even began to fill out.

But then, out of pressure from my Grandmother, I was sent to the beauty parlor and got a perm. My hair was straight, shiny and down to my shoulders. Even my brother said it looked good. I felt not dirty, but violated in a way. This wasn't me, and I was so not a conformer. At 16, that was the last perm I got.

Some years, tattoos and a few piercings later, I realized I needed to revisit my hair. I bleached and dyed it for the very first time, ever! This was when I began to experiment with vintage hairstyles. 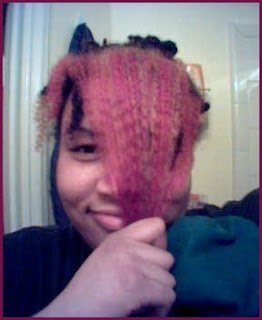 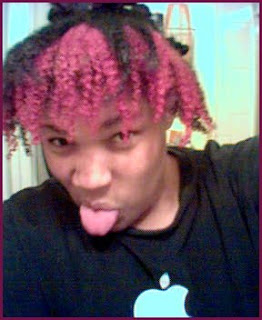 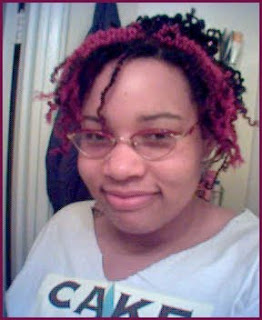 I was living in San Francisco, still wearing my hair naturally, but noticing it wasn't doing too well. I was trying all sorts of 'natural' black hair care products, as it was popular now to have your hair 'chemical free', but I realized something. It was these products that were making my hair brake, fray and frizz in the first place. A lot of them had mild 'relaxers' in them to make the hair more 'manageable'. Thats a bunch of shit, I thought to myself. 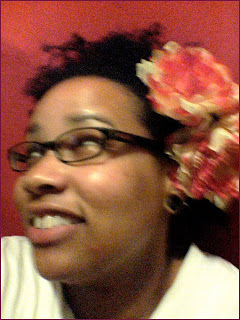 So I threw them all out, and started as natural as I could. Castile soap, jojoba oil, vitamin e oil, burdock root oil. It was a revelation, and I haven't looked back. Its amazing how your hair can tell you what it needs if you just pay attention. 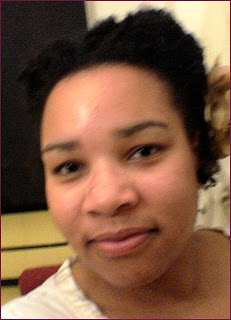 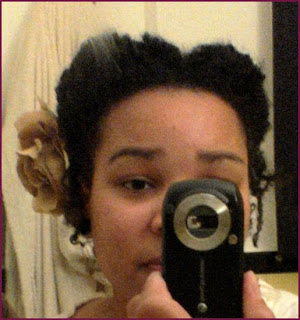 I brought this aspect up to the woman at the bus stop during our hair pow wow, and she concurred.

"They are pretty harsh on your hair." I also told her I didn't oil my scalp. She was pretty surprised by that one.

"I wash my hair every 3 days. I rub a bit of vitamin e oil in it, and Im fine," I said. "I don't do any of the ritual I was raised with, and my hair is better off for it." I could tell she admired me. One for being able to take a stand about my hair at my age, and her never having that opportunity, but also that I was perfectly at peace with my hair. I embraced it. I didn't want it to be super straight, or a comical giant afro. It was my natural hair tied back with a scarf because it was cold that day, no more no less. But it made me realize, I AM taking a stand with my hair and I didn't even know it. 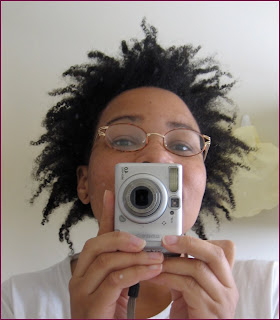 Here is my hair as of this morning, freshly washed, non styled or combed.
Im bucking over a century of common law wisdom associated with black women's hair by wearing it the way it grows from my head. Amazing isn't it?
at March 09, 2010
Email ThisBlogThis!Share to TwitterShare to FacebookShare to Pinterest
Labels: hair, personal, vintage