I have this character I created. Shes hip, sassy, and a gal you ought not mess with. Her name is Lady (Penny) Animation, and sometimes when my imagination is at its highest, I want to be her. 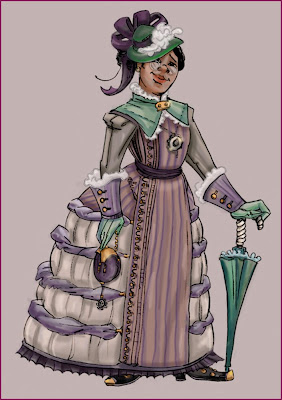 I concepted her for a comic I'm planning. Its set is a Steampunk world where she and her twin brother, an introverted scientist, live a high society life. 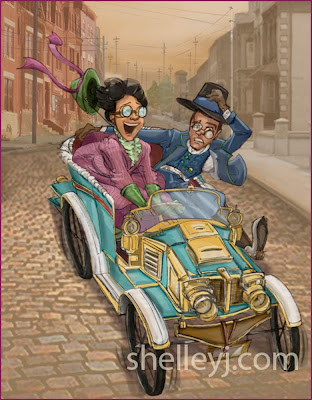 Her brother mysteriously vanishes from his lab one night and is never seen again. Its been a year and Penny is still looking for him. The question is will she find him?

As you can imagine, I loose all control when I get to envision the clothing Penny gets to wear! So much so that I want to make the costumes for myself. I have some patterns, from the early 1900s that I want to make as period correct as I can, but in funky fabrics like a stripped brocade or corduroy. 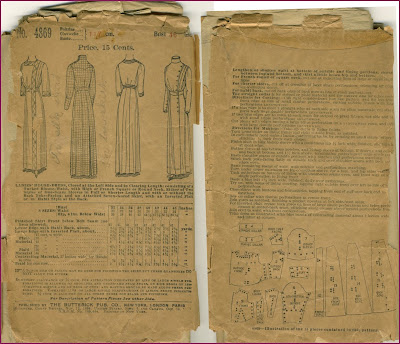 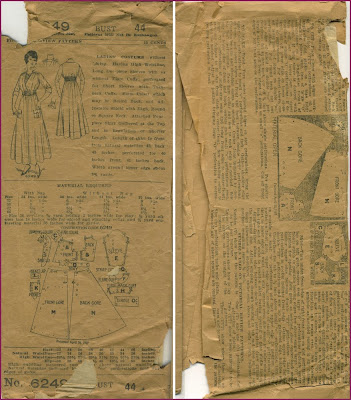 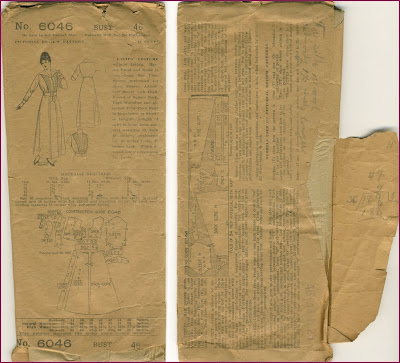 In fact, I have 10 yards of maroon corduroy just in the waits. I want to use one of the above patterns for it.
Why haven't I made it you ask, since its been in my mind for over a year? Well, space being one reason, but another being my essential need of a corset. I'm too chicken shit to go on an make one.

You can't wear those styles without one, and I do have a pattern for a corset, but I'm scared. 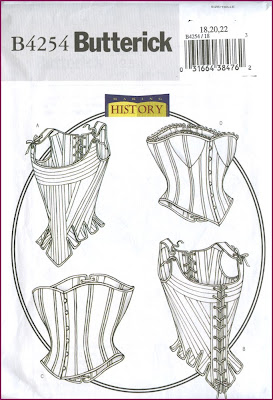 I guess I just dont want to mess up too bad, and waste all those specialty items for the corset. Plus I'm broke, that might be another reason...

I bring all this up because I was looking at a pattern I got a bit ago of 1930s collars. 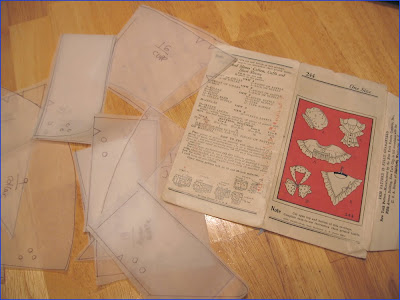 Its a one size type deal and I was curious to see if it would fit my stout frame because I'm thinking of reproing it. As I was cutting out the traced off pattern pieces, I had a vision. Stripes, brown stripes. 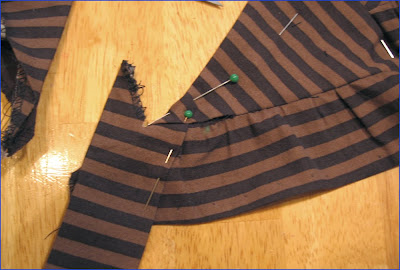 Hold on! I went and got some cotton fabric that I was holding onto for an actual 30s dress I wanted to make but the vision never materialized. "This would be so super cute," I narrated in my head, and went about striping out the collar. 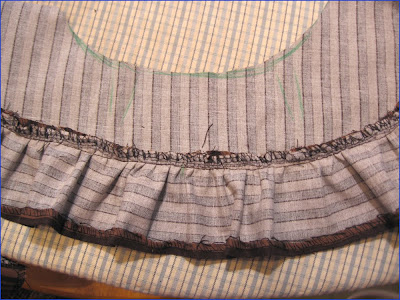 I had never made this pattern before and of course I would pick the most elaborate collar to do as a first go, DUH! The thing is, as I was gathering the pieces, I noticed there were CUFFS that go with this collar as well. 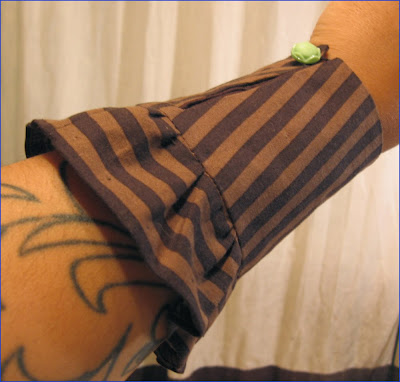 CUFFS! That is so amazing! I HAD to make them! 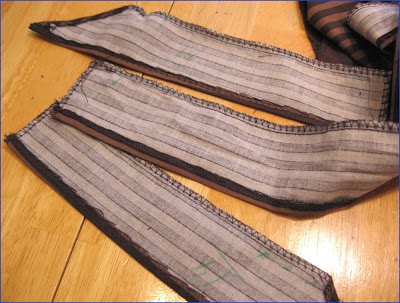 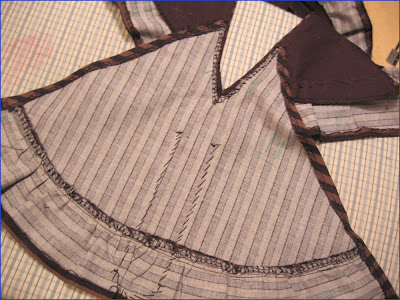 I cut all the ruffles on the horizontal, and was crafty in how I cut the other pieces. As I was making it, I kept looking at the drawing and its lovely lack of topstitching. 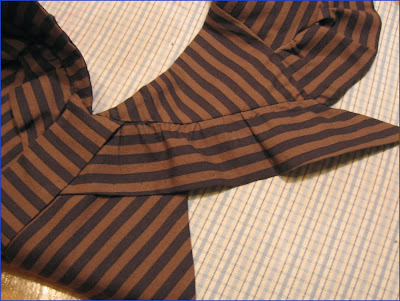 As many of you know, I don't rightly care for topstitching of any kind. I prefer my construction stitches to be hidden. That's one reason I hand sew so much. Well, this collar was no acceptation. 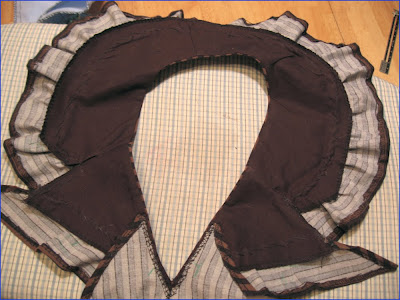 I hand hemmed all thee ruffle edges, and attached the jabot to the collar by hand as well. 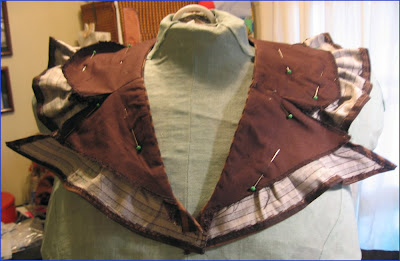 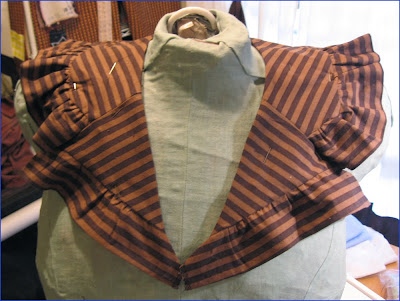 I thought about leaving the jabot off, as I'm not too much a fan, but this *is* a Steampunk look, more flamboyant than I normally go, so I said what the hell. 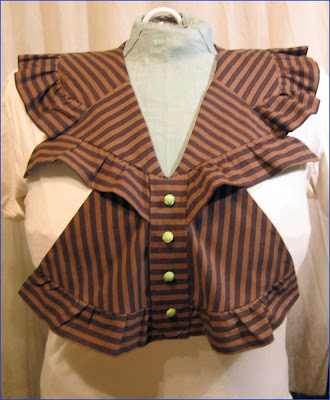 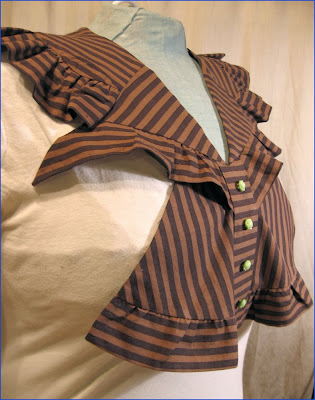 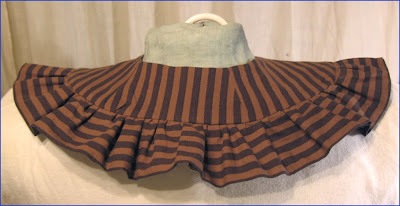 This was a half a day project, and it took me about that much time. I could have done it faster if it were not for all that hand sewing, but thats the level of craftsmanship I want to put into the Steampunk costumes I want to make. Not have it look so 'DIY', but more actual costume. 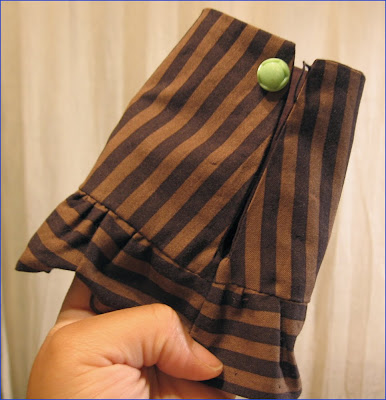 I finished it off with some mint green milk glass buttons, and, I might brag, some of my BEST loop button holes ever on the cuffs. I had a lot of fun making this and I see tons of potential in making more costumes. But I do need a corset first. It all starts from that. So as soon as i get the gumption (and cash) I think I'm ready to be brave about it and get my hind side into gear.
at July 11, 2010
Email ThisBlogThis!Share to TwitterShare to FacebookShare to Pinterest
Labels: 1930, collar, cuff, day project, dress, repro, Steampunk, stripes