This has been a relatively crappy few days in the sewing world for me. Not projects gone bad, that I could handle, more like crazy slapstick meets missed destiny movie stuff. Surreal.
It started this past weekend as I began to sew on the new blouse (see previous post). As a general rule, you are suppose to change your sewing needle after every project. Well, Im not that good about that, but I remember getting some nice new needles, and this rayon/polly blend would need a nice crisp needle. Also, I had finished...what did I finish? Well I finished something, and I wanted to start this new project off right. So I got out my tin of needles and plucked a fresh one from the packet.
Mmm, needlie goodness. The shaft on my Singer has a lovely turn screw, so changing the needle is a snap. I removed the foot and lower shaft (my machine is a slanted shank), and unscrewed the old needle. Its a process Ive done many many times and takes no longer than two eye blinks. No so this time.
*drop*
As I was tightening the needle, it dropped clean into the gears of the bobbin. What!? In all my years of sewing, that has never happened. So I unplug the machine, and remove the cover plate of the feed dogs. Damn feed dogs. I didn't want to turn any gears because with my luck, that little needle would have landed in the one spot that would constitute a three figure repair if I even thought about it.
The needle dropped in so it would drop out, right? I picked up the machine and began turning it upside down thinking gravity, the force that had put me in this mess would right its own wrong.
*drop*
The loose needle then dropped into the top gears. I couldn't see the look on my face, but I could feel it. After the flash thought of a camera being hidden in the kitchen looking at me recording this for some web spoof show, I set the sewing machine back down and got out the screwdriver.
I had to remove the top plastic casing then the side casing covering the shaft and light in order to get to where this refugee needle was hiding. But I couldn't find it. I shook the machine and I could hear it rattling, but couldn't see it. So I did it again, I turned the machine over and...
*drop*
What is this? A mysterious bar fell out of my machine. I almost wish there had been a video camera in my kitchen then. Well, perhaps not, I was spewing the salty talk something awful. For twenty minutes I looked to try and *find* where this piece went. No clue. So then I said fuck it, Im gonna turn on the machine.
I taped up the cover of the feed dogs (I learned my lesson), and hand cranked the machine. Same old lovely noises. I looked over the gears and belts and cranks. Everything was going as it should. I plugged her in and pressed the gas slowly. As I held the mystery bar the machine hummed at it's expected pace. So far so good but where is that damn needle? Aw well, while Im in here, I might as well clean out the lint.
Lemonade, I say.
So I cleaned my machine and put the plastic lid back on but couldn't screw in the last two screws. THATS WHAT THIS PIECE IS! Its the brace for the screws! Whew! So I can take that vision of something coming loose and making my machine explode as I finished the last stitch on my evening gown out of my head. Yay.
The machine is clean, working and sounding normal. Lovely. But where the hell is that rogue needle? I stand up after a defeated sigh and there behind the machine on the table resting rather glibly I would say was that flippin' needle.
I won't admit it defeated me so I threw it in the trash.
*************
You know how when you find a pattern so amazing, so stupendous, you can't sleep until it's in your warm and waiting hands? This past week I've had that experience twice, and twice I've been let down.
Look at it. 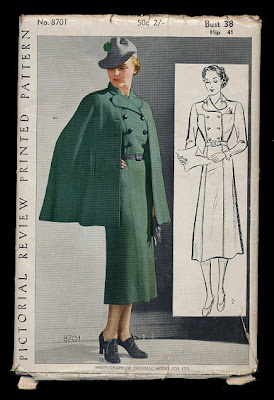 Keep looking and allow the awesomeness of its presence to wash over you. Almost like it's singing, "I am awesome!!!! La lala.."
I was on a high when I found this pattern. So excited I told everyone, shouted from village to dell. Could not *wait* to get it. I was picking out fabric and imagining the stares of jealousy I would get when I walked into a supper club wearing that ensemble. I was ready.
Euphoria ended when the seller contacted me saying she could not find the pattern.
What? Can't find it? I was almost a blathering idiot telling her how much I coveted this pattern and how I desperately wished for it for years. Don't get me wrong, the seller was stellar, very nice and accommodating, but that didn't help. Stupid missing dream pattern.
What also didn't help as a friend contacting me yesterday saying she had found the *exact* pattern on another site. Same size, same blemishes on the envelope...? What?
Lookit the two pictures. 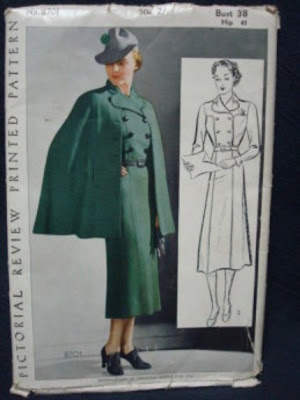 The tears in the corners and the crease in the lower right corner. That's kind of creepy, right? So after Holy Crapping to my friend, I contact the seller of my pattern. Even sent her the link to the listing of the other pattern. Now it gets strange.
She tells me I bought a *completely* different pattern, a Vogue, and that's the one she can't find. I'm shaking my head, so I send her the PDF listing of what I bought from her which is the same pattern that showed up on the other site. After that my money was promptly refunded with a promise that if the pattern is found she will let me know. Thank you kind merchant.
The worst case scenario is that the seller may have sold the pattern to someone who is selling it again. I honestly don't think its a double sell. Not for a $9 difference. The good news is that my friend told me she would let me buy it from her so yay indeed!
That was a horrible experience, but remember, I said I had this experience twice this month. 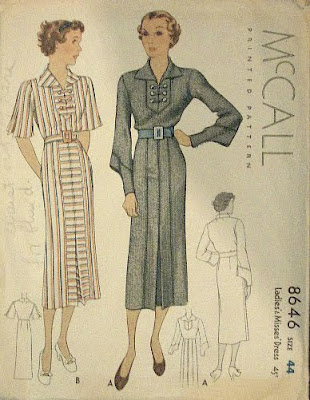 I could not wait for this pattern. I had plans to repro it, its that wicked. I even have fabric just like the fabric of the one on the left. See!!!?? 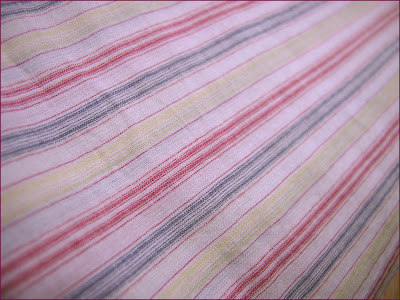 Come on! I was gonna carry around a picture of this pattern showing people how exactly alike the would-be dress I was going to make is to this original pattern envelope. Perfection. I just had to wait. A little longer...a bit more...it's not coming. *sigh*
Apparently they are stalled or lost in the United States Postal System. I'd be more patient, but it does not take 15 days to ship something first class in state. *sigh*
This seller, who again, like the other one, was very, very accommodating. She looked through her inventory and found a duplicate but no bodice or envelope! WAHHH!!!!! And so my plan of carrying the pattern picture around has been foiled. I would say that is for the best, but no. I will remember. I will always remember.
So I'm back to waiting for these plan B patterns to arrive. I'm sewing (with a new needle) and hoping that the plan B's are not needed and that the original patterns all come out of hiding and say, "Just kidding here we are! We love you!".
I love you guys too.
at August 31, 2010
Email ThisBlogThis!Share to TwitterShare to FacebookShare to Pinterest
Labels: 1930, cotton, McCall, needle, pattern, pictorial, stripes