For a lot of people starting the venture of sewing, the idea of following pattern instructions and not forgetting something can be daunting. With vintage patterns, that concept can be 10x of a challenge. Depending on the type of vintage pattern you start to sew with, a whole set of mental tricks might be needed in order to keep things straight.

I guess now would be a good time to urge all to please PLEASE trace off your pattern before using it. Pretty please!

Learning the secrets in how to read each of these presentations can help you pretty much make the instructions irrelevant. Now don't we all want to be at that point?

-The unprinted perforated pattern.
The oldest of the patterns.

The most traditional presentation of vintage patterns, and for many who are starting to sew, the most frightening. Not so, I say! All patterns have their own language. From individual pieces, to pattern manufacturer, unprinted patterns often have to be looked over. Even so, there are still some basic consistencies that are threaded (no pun intended) across the board. 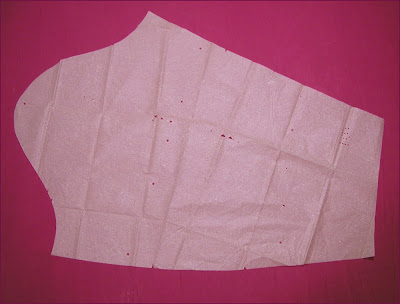 Take this sleeve piece for instance. A couple of things I've discovered with these type of patterns seem to be universal. 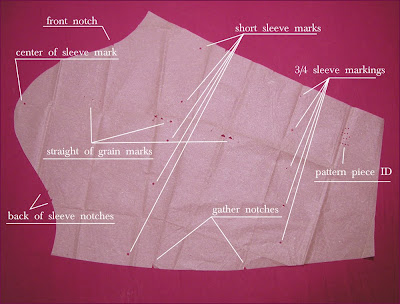 1) Generally the pattern ID will be found in the lower right of the pattern piece (the unprinted pieces I've shown are all on their side, but I'm sure you get the idea). It can be a number, a letter, which is the norm, or you can get an annoying 40s Vogue where they perforated entire WORDS onto their pieces! I've also seen some mail orders do that for some instructions as well.

This rarely helps when you are looking for a pattern and its all wadded and folded in its envelope, but from the hundreds of pieces I've looked over, a creepy majority are identified in that space.

2) Sleeves can be confusing. Which way is which? At least I often have that problem. I've found out over 90% of the time, the double notch is an indication that that side is the back. Go ahead, check the back bodice piece it goes with. I've only found on e obscure 20s pattern that didn't follow this rule. Id say those are pretty good odds. A good mnemonic device I came up with is to look at the two pointed notches as the letter B laying on its side. B is for back! HA! I need to do stuff like that or I am all turned around.

I tend to like sleeve patterns that have the center mark in the cap of the sleeve. Its a great thing to have especially if the sleeve is gathered. Also, to compensate the elbow, often two notches or a dart are marked on some patterns. I remember when I was first sewing, too lame to throughly read the directions, Id say, "What the frick is this sleeve doing so lop sided!?" Then Id just cut off the uneven cuff. Oh how silly I was... 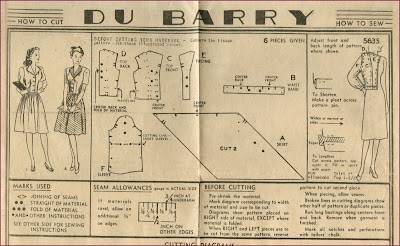 To get a sense of the overall markings of a pattern, those handy diagrams that are given in every unprinted pattern always mark the center lines, the places where the pattern is to be on the fold (often marked with two or three large circles, or three circles forming a triangle which is a marking I always use to mark the fold).

Grain lines are generally a series of three small groupings of dots, or two rather large dots spaced out on the pattern piece.

Other odd markings that can appear can be in the shape of ovals, squares, even triangles. They are often marking where a placket should be, outlining seam allowances, or where to fold a pleat. There generally isn't anything too special that would warrant such an elaborate shape, but perhaps there were too many circles and such on said pattern that pattern makers though women might get confused. I wouldn't put it past them.

-The Printed Pattern.
To tell you the truth, these are my least favorite. I find them overly complicated, and wordy. One thing is, they are often printed on one flat sheet making the buyer cut out each shape. Going to that from perfectly shaped unprinted patterns just creates an extra step. I've never understood the need to mark seam allowance on a pattern. The instruction page will always tell you the SA, so why have it on the pattern? I think it just creates an overly complex maze of lines to follow and really, who is ever going to transfer that onto their fabric?


In the 20s, McCall came out with their incredibly beautiful 'printed patterns'.

I find they are so lush, so elaborate, they could be famed. But to work with? So much over information. Everything was printed on the pattern pieces. Everything. Every word, every sentence, every instruction. See how cluttered it is? I can bet these were all the rage. Even the notches, where you match pattern piece to pattern piece are numbered! What woman wouldn't want to have a pattern that lists all you are to do on the pieces? But I often wonder how much of that information was genuinely used.


From the 30s on McCall pretty much refined their process of completely printed patterns, ditching the blueprint novelty look for one that we pretty much know today. 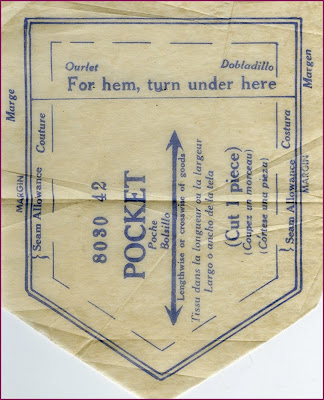 But there was another type of printed pattern, one that used the best of both worlds. The visual of the perforated pattern, with the ease of the printed.

-The Printed Perforated Pattern.
I LOVE this type of pattern. 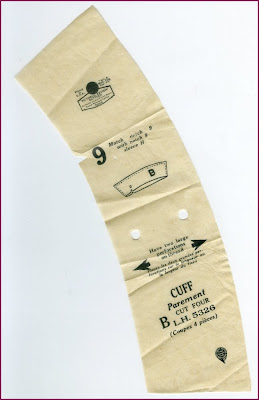 They seem to be very sporadic, having been used by some of the lesser known pattern makers like Pictorial as early as the 30s, and then surprisingly by Simplicity exclusively in the early to mid 40s before they switched to all printed. I just find their use of this such a divot in the timeline of pattern history. 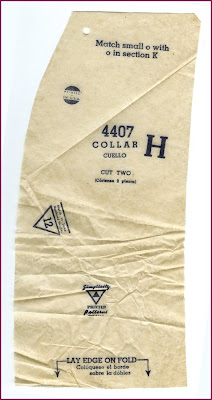 I wonder why Simplicity did it. Can you imagine, the marked notches along with the actual notches, the pieces already cut out, the grain lines printed on the pieces, each piece labeled often with its pattern size? Wonderful.

So there you have it, the languages of vintage pattern pieces all laid out for your viewing pleasure. I thank you for your time.
at August 18, 2010
Email ThisBlogThis!Share to TwitterShare to FacebookShare to Pinterest
Labels: 1920, 1930, 1940, McCall, pattern, pictorial, simplicity, VPP