Good happy Friday everyone. Whew. I know it seems redundant, but I am still recovering from the last couple of weekends. From work to dance class to extra sewing projects to cooking (made pesto for the first time) to build up of a lot of stuff, to cleaning...geeze. It just kept going and going.

BUT NOW!!!! I feel things have slowed down a bit and
I can get back on track to my normal creative schedule. Yay!

First things first. I bought myself some pretties. 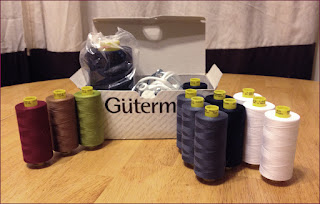 Thread!!!
I wanted to get a decent spectrum of thread for my serger and
I decided to invest in some spools.
I love stocking up. 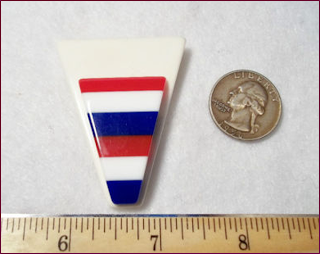 I also finally found a nice sweetheart piece. A V for Victory plastic brooch. It came in the mail a few days ago and I was really happy until I saw it had a crack. The crack is on the large white back, right above the right side of the top red stripe. It's about 3/4" wide, but I'm not sure if I want to return it. The crack is a hairline, and I didn't pay as much for this as I planned, I don't believe the stability of the plastic is threatened unless I intentionally broke the back and I really like it even thought the listing didn't show it (it's obvious that it was there before hand). Oh, here I go, over thinking. 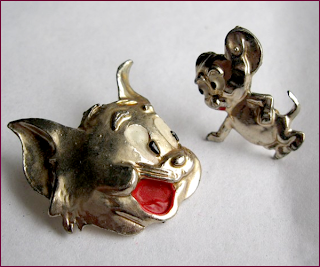 I also decided to get something that had been in my etsy favorites for a long time.
A pair of scatter pins that are Tom and Jerry, the classic cartoons.
I have them on my tailored jacket as I type this :) 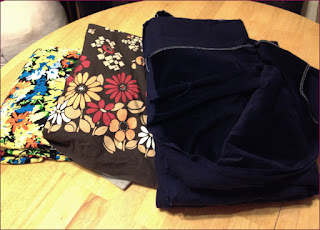 Also, the fabric I ordered came. I didn't know how good it was going to be, but I am over the moon about the navy cotton velvet. Cotton velvet is SO HARD TO FIND!! It's so lush and has a great drape! A plus was the cotton to it's left, the brown cotton I bought, is a border print! Squeee!!! That print is going on the hem of a skirt!!

One cool thing about being in the vintage scene here and sewing is that people often give you sewing stuff. It's true! One of my buddies gave me all these remnants of really nice 60s wool that belonged to her grandmother. 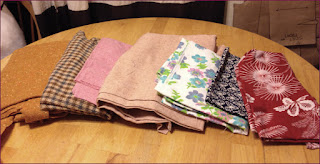 The navy print is linen and that's new but still swell. Im excited about that orange fabric. It's flecked with some cool colors and will make a great 30's styled something one day. Oh! A beret!!!

Okay, okay. Let me collect myself.
Oh yeah, I dyed some more sweaters.

I tell ya, Lands' End and their $16 sweaters will be the end of me!
As you all recall, I bought some Lands' End sweaters a few weeks ago. Before the mass purchase I had about three sweaters in my wardrobe and I only wore one of them. Now, (thanks Lands' End), I have 10, no, twelve. About that, yeah.

The new ones I aquired are an XL in the misses size. The 2X in the plus size I bought previously were too large so I'm going to take them in. I want the fit to be like a blouse but with a bit more ease so I can almost wear it as a shirt if its cold enough.

I'm starting to think I get them just so I can dye them.

The ones I bought this time to dye were a wool/nylon blend. I'd had much success with the iDye from Jacquard, so I went on and bought their acid dye for the wool. They recommend using both their dyes on blends which is what I did. I also added 1/2 cut of salt and 1/3 cup of white vinegar because with their acid dyes you don't need a special ash or fix. 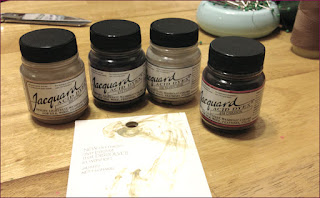 Well, the dying turned out fantastic!

I can't wait to select buttons.
Okay, okay, so I've splurged on some things. I will use them! I'm also waiting for some more fabric to come. I KNOW!!!! But after that I'm done for a while. I haven't found any patterns that have interested me so I'm gravitating toward fabrics.

I think I'm going to make some hats to go with my sweaters.
I hope everyone had a rocking Thanksgiving. I played it cool. Cleaned the home, washed my hair, watched a movie and did 6 loads of laundry. I still have three more to do. Then a birthday party this weekend. I'm so on the go!

Speaking of which, I should go to bed. I have to work on Black Friday.
Have great day everyone!!
at November 25, 2011
Email ThisBlogThis!Share to TwitterShare to FacebookShare to Pinterest
Labels: 1940, 1960, brooch, cotton, dyeing, navy, sweater, velvet, wool