The ick of procrastination.

First off, I've put up more photos of the flapper dress on NVL. The finished balboa dress is coming shortly.
We have all been there. You need to do something, how ever minor, but you keep putting it on the back burner of life even though doing said tasks will make something easier. It could be writing a letter, or mailing in a rebate before it expires. Calling some person, or putting all those patterns away. Those tiny things always add up, and for me, they are always so hard to get done.
I can do the big stuff, I can always do the maintenance that is seemingly routine, but those tiny things that I mentioned seem to stump me. I don't know why, really. It's not like these tasks won't take more than a few minutes each. Perhaps its the idea of complexity changing the task of the brain for a different project. Even for 5 minutes. Brain lazy. Man, have I come to that?
I'm taking this to task with Make & Mend. I actually wrote some letters that needed to be written, sent out some stuff, took out tons of boxes for recycling and just did some minor odds and ends. I feel cleaner, you know?
Also I started on my repro dress.

I was so excited to take this dress to task, until I got a good look at the bodice piece. I literally stared at it for a good twenty-five minutes. I just could not figure it out and the instruction sheet only gives a couple of sentences on how to attach it to the shoulder seam. 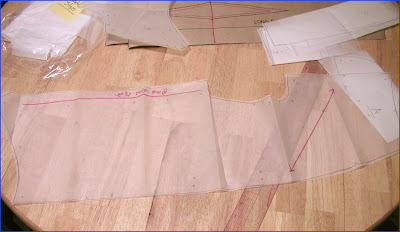 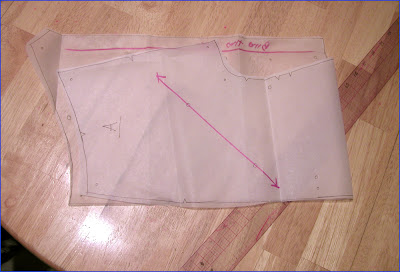 Mainly I didn't know how to grade it, or rather where. In the end I figured out the idea of it by folding it in half. Yes everyone, twenty-five minutes later I folded the piece in half. Me is so smart!
From there I realized the seam that sandwiches the pieces is opened and the bodice is folded over the front. I needed to mark a new center seam for the fold over part, and add a bit of width to the piece. Next was cutting. 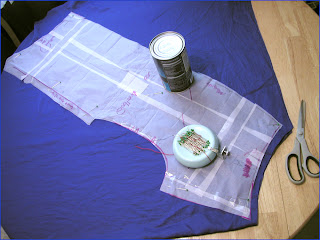 I was at a crossroads, This pattern really calls for light flowing fabric, and this blue (I have no idea what it is) has a great drape. I didn't want to just waste it on a mock up. That and this front part had me so confused, I decided to cut out the entire dress and if this mock up is good enough, I'd re-sew it with proper stitches. 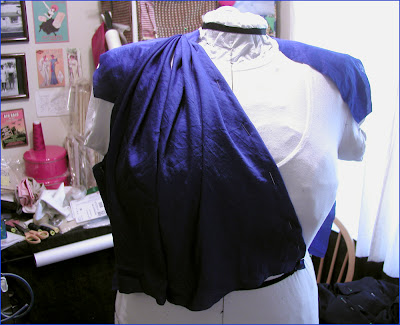 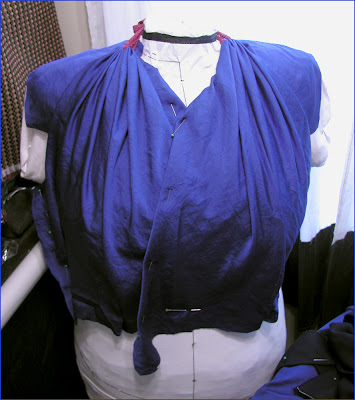 I cut out the bodice and told Onda to be on the ready. I still was not really seeing this in my mind's eye and I needed her help. Well she came through in true form, ha! When I draped the pieces on her, it all clicked. The shoulders are strange, though. In order for them to fit, there will be a gape between the loop part of the bodice and the neckline. Or at least that is how I'm seeing it. 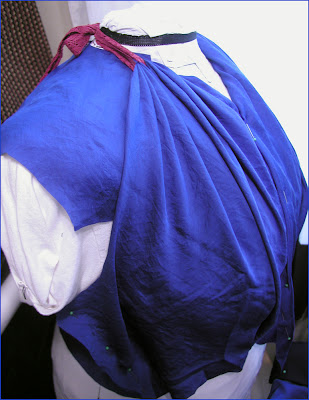 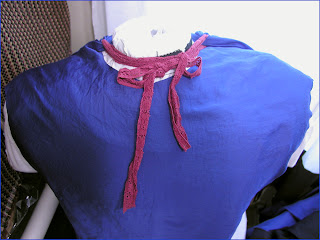 As usual my shoulders need to be altered and I can simply cut this away on the altered pattern, but because the front bodice is on the bias, I feel I added a bit too much to the bust, so I'm cutting down the front fold by about one inch on each side, and cutting the center seam down by an inch. I don't want the loop detail to be too bulky, hence the need for a lighter fabric.
This is what I have so far. No sewing yet, but it is all cut out (sans the sleeves). I'm getting excited about it. I added a bit of extra sweep to the skirt so if I can make this a wearable mock up, it's gonna spinnnn!!!!!
Happy Saturday!
at June 04, 2011
Email ThisBlogThis!Share to TwitterShare to FacebookShare to Pinterest
Labels: 1940, dress, MnM11, music, nvl, progress, repro