Happy Monday everyone! Hope you all are still plugging away on  your Make and Mend projects. I've been blog hopping and I'm seeing tons of people taking advantage of the Make and Mend mentality. It's inspiring! Keep it up!
I guess you could call this an alteration, though, with all the summer refashions going on in the sewing blogosphere, it seems to be an epidemic! 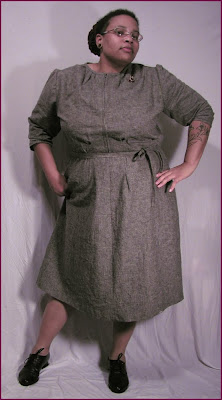 I made this chambray dress a while ago from one vintage pattern that I thought, and still think is just tops. I do like how it turned out, especially since it was the first attempt, but there were mixed reactions to the final outcome. Now you all know me, I'm not one to fall into peer pressure, and I didn't. But the fabric is very heavy, and warm, and winters in Los Angeles are like the elusive white elk, so I decided if I was going to put this thing in my normal rotation, I'd have to do something with it. 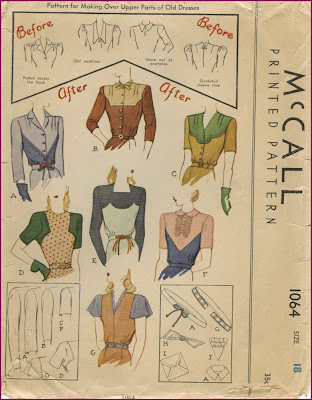 Perfect! I bought this 40s refashioning pattern a while ago and I was so desperate to try it out! How could I ask for a better opportunity!? I chose view C with those cool scallops!
First I needed to assess this dress. The bodice is gathered at the waist line and at the neck line, so I had to make sure I gathered the mid-bust prior to alterations so I could make sure the grain line stayed straight when I added the new yoke. That was not too hard, I just gathered it as I cut out the new design. 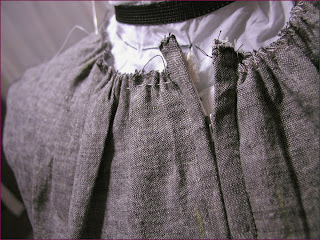 Another issue was the way I completed the front of the bodice. I added this very amazing vintage zipper. Not only would I have to move it, I feared I'd have to cut it. No! This is most likely my oldest zipper, and I don't want to alter it in any way, so I carefully removed it and thought a bit. I plan on putting it back in this dress, but I'm just going to lower it so it will extend in the skirt a few inches. Not too big a deal, I'll just need to do some hand tacking.
Ripping stitches , the great time sucker. Let's face it, it's the major reason we don't alter any garments. Come on, you all know I'm right. It can be a pain, especially if you are not confident with your original stitching. I still know people who sew two or three rows of stitching on the same area. What? That screams amateur, and of course you wouldn't want to rip out all that stitching. Being confident in your original construction, as well as alterations. Intentional stitching instead of 'I'll just sew until it's connected' makes your work sound, but also easy to take apart if needed. 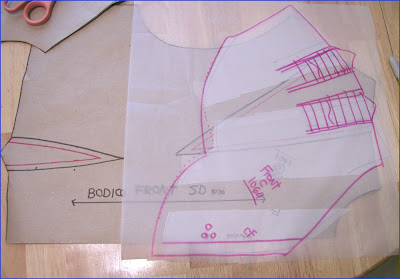 It was tough finding fabric that would work with an off white and black chambray. I'm not huge on mixing too much unless the fabrics compliment one another, and I didn't have anything that would work with this chambray that didn't make the dress look all gothic or like I worked in a hotel. I ended up using some tan linen (that has a super lint fetish) . It's a nice calm compliment to the chambray, but I thought too boring on ti's own. I looked through my trimmings box and found some plaid piping I made a few years ago. I had tons of the stuff and it's value worked perfectly with the low key tones of the fabric I was using. I love it when things work out like this. 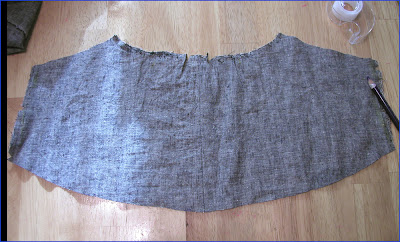 With the dress apart and fabric selections in tow, it was time to move onto the pattern. Again, I choose this yoke because it had tucks at the shoulder which would give the extra ease that the gathers at the neckline did on the original dress. I traced out the original size, a 38 bust, then slashed it according to my slopers. Again, I will say, slopers are awesome. 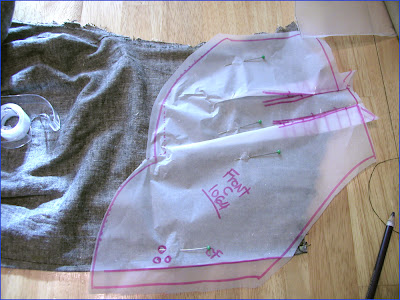 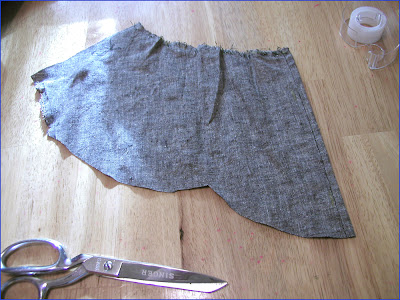 With the pattern altered I can begin construction. First thing I did was cut out the tan linen. Next I did as a practice was cut the back yoke of the original dress. The back has those gathers as well, so I made sure that I paid attention to that. With the original design I cut the back of the bodice from two pieces, so that center seam line needed to be refinished with a new back stitch at the end so that stitch wouldn't come undone. I know that is a finishing that A LOT of people don't do, especially when making alterations. DO IT on any seam that is cut. Yeah, it takes more time, but do you really want your effort to start to unravel and then you will have to whip stitch the gapes? 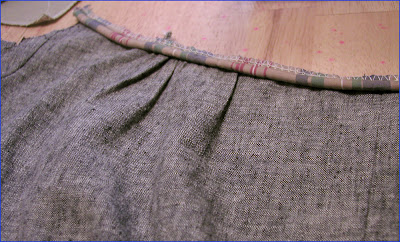 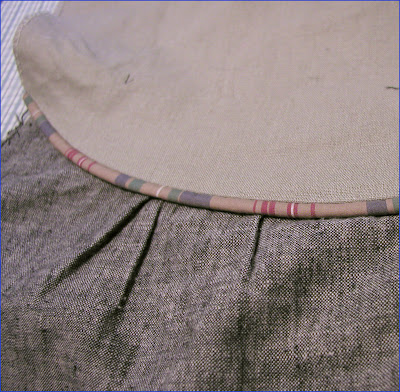 All my pieces were cut and overlocked (I made facing pieces for the new design). I decided to do a bit more craftsmanship on this one, especially pertaining to the piping. Generally I would just sew the two pieces of attaching fabric with the piping sandwiched between them all in one go. I wasn't too confident with that so I basted the piping in place with my machine then added the yoke and it fit nice and snug in place. I did the back first then the two bodice pieces. 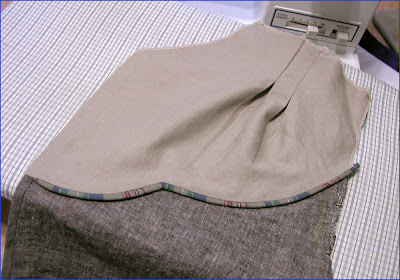 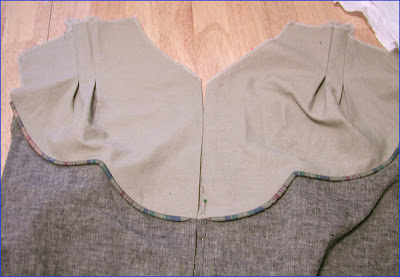 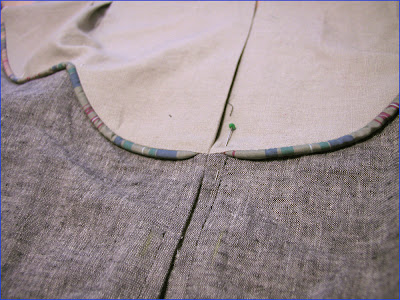