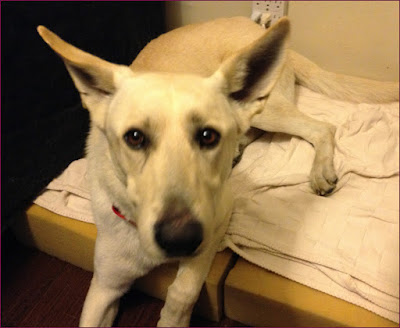 Welp, he is finally here. I was so excited on Friday evening. I had prepared to leave an hour early from work in order to get to the vet at a reasonable hour. You see, he was being neutered, and I asked them to kennel him until Friday so I could have the entire weekend with him uninterupted.

I get there by bus on Friday evening. What was I thinking, it was bumper to bumper. I walk into the vet, and he looks at me all strange. "I'm here to pick up my dog," I say.

"I don't have any dogs right now."

"What? He's being neutered and kenneled here." The Vet shakes his head. I tell him he was the vet from the shelter I used. So he let me call them. The shelter was still in blackout from the wind storm a few days ago, and they didn't have their computers up.

"Where is my animal," I ask rather pissed. It was 5:20PM and I know most of these places closed early.

"Did you get the name from the person who called you?" There was a vet tech who told me that they would shelter my dog and stuff. The thing is, all the documentation that I was given was to the vet I was standing in from of! And this person at the shelter wanted to make this my fault!

I promptly said, "I'm at the vet that all the paperwork said to be at and he is not here. Where is he!?" They continued to look based in the dogs shelter number. Apparently they use more than one vet and he was at a vet two towns over (Pasadena) and they were in blackout too!

I called the vet at 5:40pm but no one answered. I think I called like 6 times flustered that no one responded. All I could do was go home.

The next morning at 7:30, I get a call from the vet saying they had him, he was fine, and they would be open until 10am because of the blackout. This vet was so nice and if they were closer, I'd totally go there all the time! I hopped on the train, called a cab to shlep us home, and the rest is history. 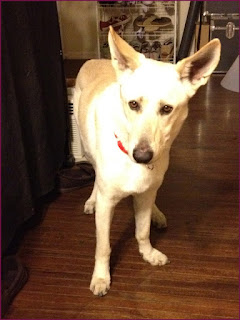 Taylor is a good dog, though he has some separation anxiety that we are working on. So far, when I would go into the bathroom, he'd weak out. Now, one day later, he slightly whining in my 45 min bathroom stays. I also left the house for a couple of hours and despite a few minutes of barking, he did alright.

He also has some mild kennel cough and his nose is all stuffed. Poor thing. I see him wanting to go to sleep but as soon as he does, he has a coughing fit.

Turns out he's also potty trained. He has big pee pees (or as I call them, tinkle pots) in the morning. This skinny dog has a bladder like a gallon jug!

My cat is indifferent to him. But my cat is an ass, so what else is new. 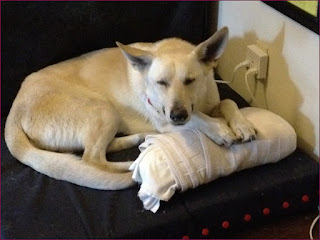 Today will be his largest test. I'll see how destroyed (or non destroyed) the apartment s when I get home. He's got chew toys, fresh water and food, and after our bike ride/walk/run this morning, he should be sleepy all day.


Let's hope so.
Okay everyone, have a great Monday!
at December 05, 2011
Email ThisBlogThis!Share to TwitterShare to FacebookShare to Pinterest
Labels: personal