Oh man. I had it all planned. This weekend was going to be the end of my unpacking. I was gonna knock some out on Friday night, then Saturday and Sunday it was going to be a home run (or should I say touch down considering the weekend it was) in getting all the rest of the bit put away. Well...


As I'm heading home from work, I get a text from my lovely friend wanting to know if I wanted to go swing dancing with her. "Sure," I say, really wanting to stay at home, but I try to never turn down a chance to dance! Well, we get to the bar, which was very nice by the way, and after our arrival at ten, and being there for two hours, no dancing. I was tired and cranky and just wanted to go home. So I did. Turns out the place got started after midnight, which is cool, but I was in bed by 1, so...

Saturday was the day! I'm gonna spend all day and night unpacking and getting stuff together. For the most part, that is how it happened, but my friend's monthly cocktail party was moved from last week to Saturday, and I was on the fence about going. I decided not to go. I was tired and I wanted to unpack. He kept razzing me about getting 'old' and staying in. Apparently he does note read this blog, and I *could* have been mean and pointed out his "I'm tired" and the "we are sick" notices he posts literally every week for something or other, but I didn't. Okay, I went, had a grand time and got home at about one.

Nope, Sunday is the day, I assure you!. Nothing planned. I intentionally missed the Santa Monica Vintage Expo to stay home and unpack! Guess what? I did unpack!

I did 5 loads of laundry, and set up my drawing area. I cleared my kitchen, and even got to work on my sewing nook while I was watching crappy movies on streaming Netflix. Mmm, there is something about just taking a brake and being at home to set up your personal space. I had a nice time. I'm a home body anyway. I like for my stuff to be in order.

I'm making progress. Clearing out empty boxes, organizing my cupboards (which was big on my to do list) and just setting up my vintage stuff. Hanging up my clocks and putting my framed pictures on the wall.

I hope to have everything in its place by next weekend. Why? Because that next weekend is the LA Air Raid, and I'm going! SO I have to figure out what I'm gonna wear. Decisions, decisions! 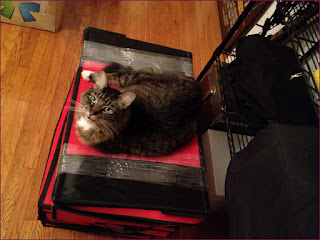 More on that later. Now if you will excuse me, I have to go wipe up four pools of cat vomit before I leave for work. Oh, the glamours life I lead.
at February 06, 2012
Email ThisBlogThis!Share to TwitterShare to FacebookShare to Pinterest
Labels: 1930, New York, personal, simplicity