Two posts in one day, I'm on a roll!
So I put together the bra. Ladies, I'm pleased to say this bra is a day project. Really.
The thing went together in less than 30 minutes, and even if I had decided to add elastic, or make any real changes, it still would not have taken over a day to make this. That's the good news.
The bad news is this bra isn't my size. I already knew this, so I'm glad that I made up those cup pieces, so I now have a jumping board now that I have a clear understanding of how the bra goes together. 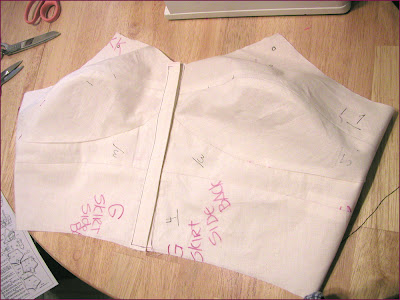 First off the bra has a 1/2" seam allowance, so if you want to do some slight size adjusting, or flat felled seams (which I'm gonna do on the finals) you have ample to play with. 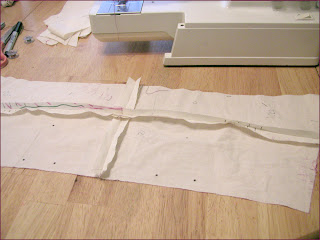 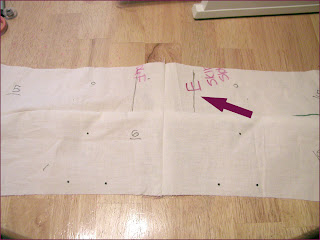 There is that line that is on 5 where it says to cut it off and add elastic. I'm making the long line, so I did no such thing.
I mean it looks great! It's just not sized for me.
Here are some of the issues my body cane across with this bra.
First off the cup size is way too small. Its a 48 bust alright, in complete width. And just like most all vintage patterns, it's sized for about a C cup. 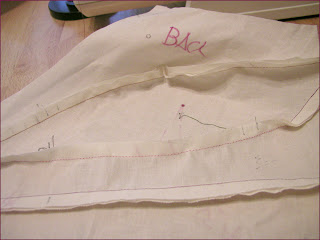 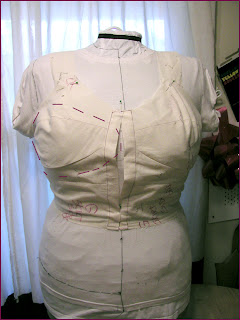 (The dashed line is all me that I'm going to have to add).
Don't get mad at the bra, thats how mostly all vintage undergarments were sized. Thank the 50s for the introduction in cup sizes :) 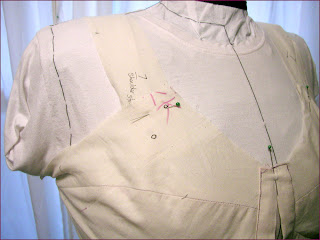 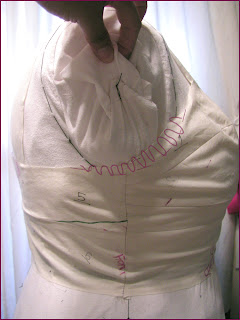 (Squiggly is future cut a way.)
I modeled this on Onda who has no ease. I tried it on myself, and I could fit it fine. My boobs were not too squished, more undefined because they were pressed to me to fill that 48 bust, you know? 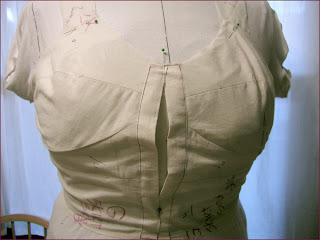 Also, I think what I'm going to do is take to heart that instruction sentence that I posted in the earlier post. I think I'll make the back in elastic, that way I won't have to worry about a fastening for the front. I can just pull it over and go. 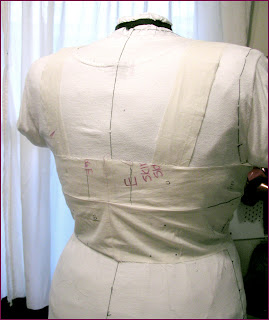 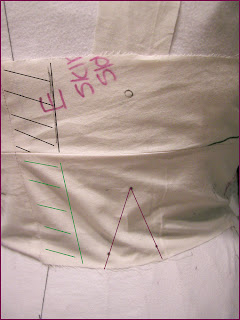 The triangle is the original dart, and the black is the pattern suggested removal area. I'm going to remove the green as well if I make this long line and as a pull over. 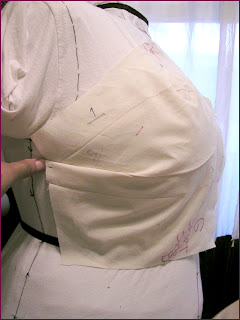 Now comes the challenge of fitting my bra cups onto an altered version of this pattern. I think I'm up for it. So my conclusion of this mock up is that this bra, if you are a large bust, is small in cup size, but a great jumping point for making a custom bra for yourself, and it's not as intimidating as you might think.
So go for it!
More to come tomorrow :)
at August 20, 2011
Email ThisBlogThis!Share to TwitterShare to FacebookShare to Pinterest
Labels: 1940, bra, day project, foundation garments, progress, repro