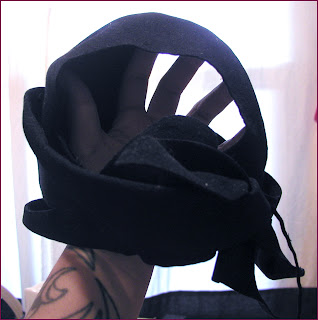 How is everyone doing?
It seems it's been slow around the tubal-interwebs. I presume people are out enjoying the summer before school starts. Since I don't have to worry about school in any capacity (yay), I've been sewing.
I designated this week my week to get rid of projects. I had paperwork I needed to complete, a freelance project I've been putting off, and other odds and ends. This cloche is one of them. I've only had it for a few weeks, but I don't want the project to get numb on me.

As I described before in my first post about this cloche, the owner, a friend of mine, got it for 99¢ at a wardrobe sale. It was in pretty bad shape. The velvet insets were all rubbed raw, and the silk lining, as with most 20s faire, was shattered beyond repair. It's an involved project. 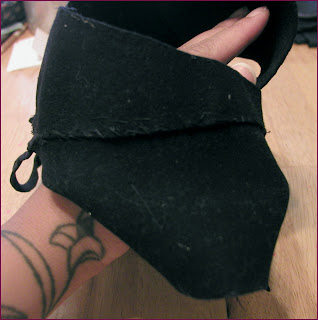 The first thing I did was take stock of the garment. The felt was in great shape, so I didn't have to worry there. Next I had to see the construction. This hat is completely hand sewn. I don't want to say the maker was lazy, but I found a lot of the stitching for one part continuing to another. An example would be the stitching of the felt to itself then that same thread was used to tack in the velvet. I *hate* that. If I'm working on something that connects to another piece, I sew those two separate. Seeing this as I took out the lining and the velvet insets made me realize I'd have to look over all the connected felt to make sure loose threads were tacked in appropriately.


Here is some of my double stitching on the side of the crown. What I did enjoy seeing was all the doubled thread in this hat. That made me happy because I do that on all my hand sewing.
There, the crown is in good solid shape. Now onto the real work. 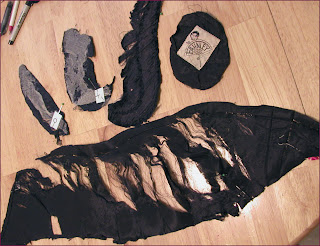 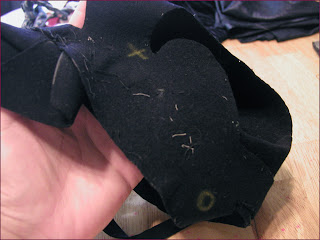 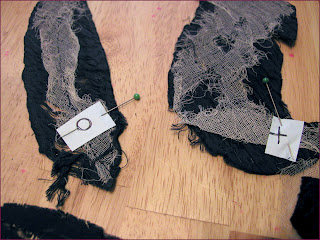 Once I removed the pieces, I made sure I kept them straight be labeling them with shapes. There are three bias cut pieces of velvet, and two bias cut pieces for the silk lining. 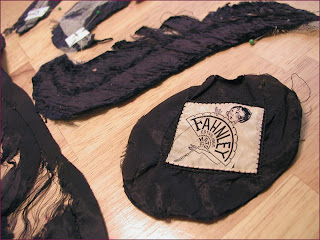 I then pressed them flat. Here is where I would trace the pieces onto paper and then use that paper as a pattern. Since I'm never going to work on this hat again, I skipped that step and use the tattered pieces themselves. I cut them out then decided to get out my serger. 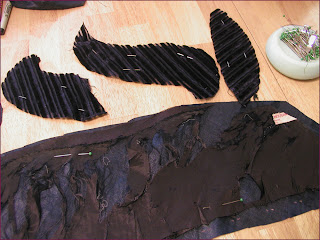 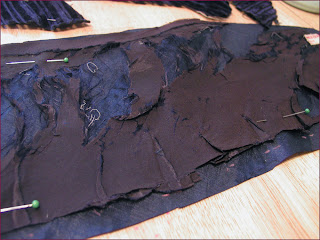 I loathe changing the thread on my serger. I mean, it's not even that it takes that long. I just snip the thread and knot on the new color, but for some reason I can't stand to do it. Really, I often just forgo a thread change because of that excruciating two minutes of thread changing. I have no idea why...but I digress. 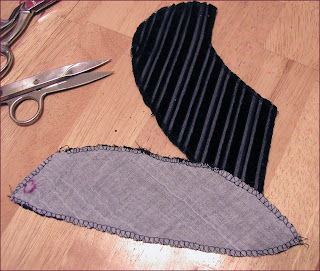 I changed the thread and overlocked the lining and the velvet that I backed with a light cotton to mimic the backing of netting on the original velvet. I then hand tacked the original hat tag onto the crown of the new lining. This was a request by the owner. I think it looks awesome. 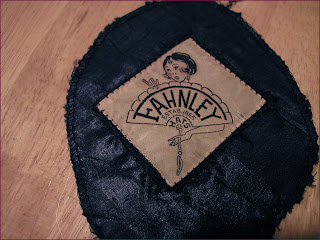 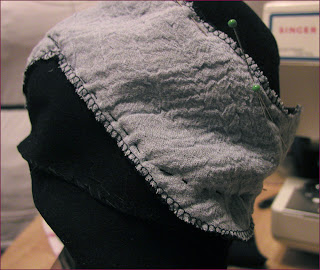 From there its hand sewing the new velvet into the hat and then working on the lining. The original lining has small pleats around the top of the crown before its stitched into place. I'm going to do a basting stitch and gather it because the pleats were so soft and I'm not too sure how off my new lining is in size from the original. 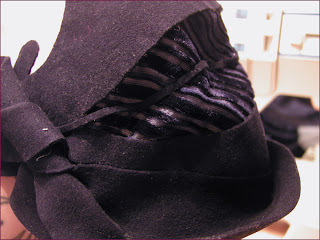 I should be finished with the hat tomorrow. I'll post the finished restoration photographs on NVL.
Have a great day everyone!
By the by, what are you all working on?
at August 10, 2011
Email ThisBlogThis!Share to TwitterShare to FacebookShare to Pinterest
Labels: 1920, hat, progress, repair, silk, velvet