This hat I was particularly interested in starting.
I truly like the cut and to remake a man's hat was going to be an adventure for me. 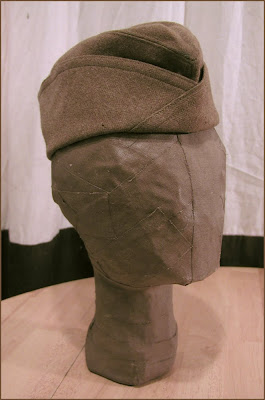 The hat is for a friend of mine who is a vintage soda jerk. He sells treats and confections at various places and wants this piece of headwear to complete his vintage uniform. I'm copying the hat from an authentic WWI British hat and let me tell you, I was an excited gal to get the chance.
Tracing off the hat was easy seeing as there are only 3 pieces. 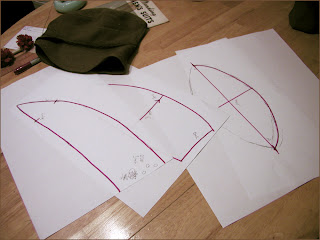 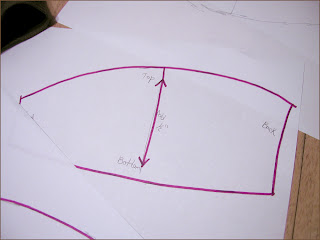 I added half an inch to the overall design by slicing the crown short ways down the center, slicing the sides the same, and adding 1/2" to the end of the side that is cut on the fold. That was easy enough.

After the tracing and adding of room, I cut out the lining in a very light yellow calico adding 1/2" seam allowance. I wanted to test the pieces to see if the fit was good. Success! Well, that was easy enough.

From there I got out the linen and backed it with a nice taunt prima cotton for enforcement. I overlocked all the linen pieces with their cotton backing and began construction.

Hmmm...4 total pieces of the hat, three of those four are also the lining. Okay, this is pretty simple. A challenge was the crown, its pointed at the front and back so I wanted to make sure I maintained as much of that point as I could because sometimes it's easy to just gloss over simple things like that in order to make sure the pieces fit. 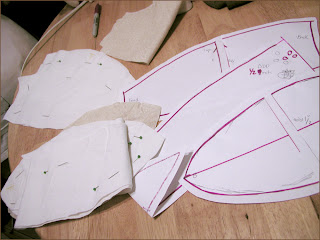 I sewed up the sides and the crown of the new linen hat and actually did the top stitching as well. Sweet! This is coming together fast! Man, this could have been a day project. Notice I said could have been. After doing all that careful top stitching I realized I made one HUGE HUGE mistake.

The crown of the hat is cut on the bias. Shit. I didn't pay attention to that when I was looking over the original hat and oh boy did it make a difference. The original hat folds like a champ along its center crown, as it's supposed to. My remake, it does not. It's a stubborn little child and refuses to fold straight. Why should it? It's not in it's nature. Oh bias cuts, is there no angle your seductive 45 degrees can't master? 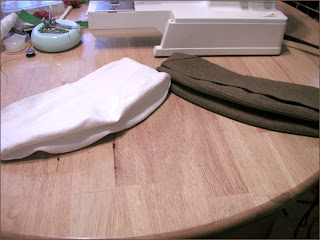 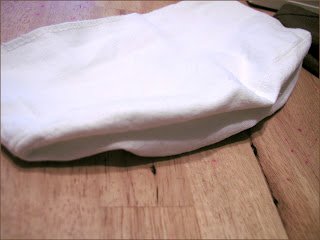 So I ripped out the top stitching and the construction stitching on both crowns for the lining and the hat. I got out my fabric again and this time, I tell you, I cut it correct. Now! Its looking good. I suppose I could have left it. I mean I did do all that work, but it was wrong. It's not about being a perfectionist, it's about getting over a 'it's good enough' mentality that I seem to find myself stuck in a lot, especially when it comes to sewing. Hell, when it comes to life.


Anyone else have a 'good enough' mentality to things in life? How or do you try to overcome it?
It's my friend's birthday and he is having a party this Thursday and it's also his premiere of his full uniform. I want to have the hat complete by then and I will. I think it will turn out really nice.


Have a great day everyone.
at March 16, 2011
Email ThisBlogThis!Share to TwitterShare to FacebookShare to Pinterest
Labels: 1940, hat, linen, Man Month, WWI