Everyone need undies. Hey, I'm wearing them right now! I would hope you are too but I'm not going to impose on your right to go commando. 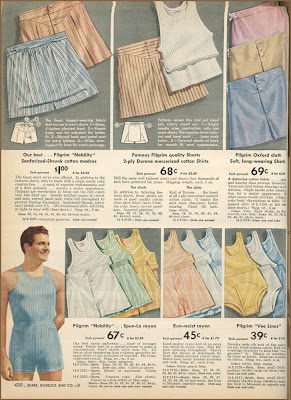 (scans from Sears summer '43)
For those that *do* partake in the practice of undies, please, read on.

While I was gathering information on vintage men's underthings, I realized that they are often way more complex than women's. I don't mean girdles and bras, that's a whole other can of fish, but in the since that most men's under things are quite involved. 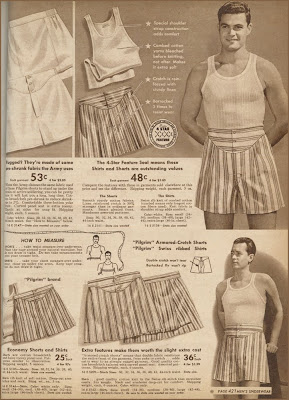 One thing I've noticed is that most man-'gerie is heavily constructed with all types of finishes and buttons and such. Flat felling out the wazoo, literally. Heavy knit jerseys, amazing seam bindings and snaps and all sorts of things. I mean you could spend a long time just researching the history of mens underpants.


But getting back to the task at hand. I cut out a set of undies from my reproduction pattern. 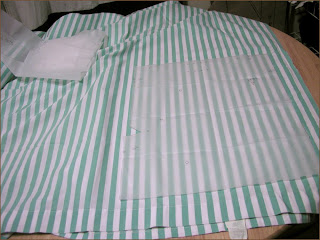 I used an old sheet for them (which was not that uncommon). It's a cotton/polly blend and smells like fresh washed linens, mmmm. When I overlocked the fabric, I decided to adjust my chain stitch to a more dense chain. Here is a comparison to my jeans (below) and the cotton undies. 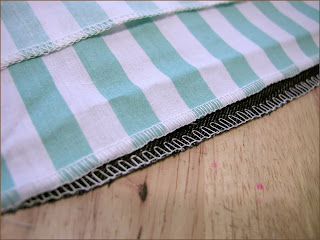 Now begins construction.
I have to admit, I did forget how I put together my first pair that I made some time ago. I decided to follow the instructions faithfully and for the life of me found myself redoing all the stitching after I finished this first major part.
The instructions start with what I consider the most complex part of the construction, the crotch seam at the fly. Geeze. I loaded up my machine with a fresh needle, threaded it with my cotton thread (which is thicker than my normal thread and can be a bit bulky but hey, that's what they used) and got to it. I also shortened my stitch length as most men's undies and frankly older clothes I've seen have nearly 10-12 stitches per inch. Thats a lot!


The instructions had me fold over the front pleats near the waistline and bast them.
I pinned, I'm cheating, I know. 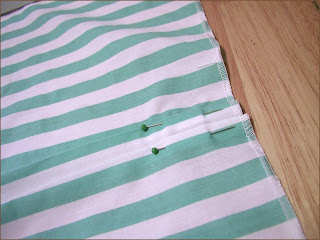 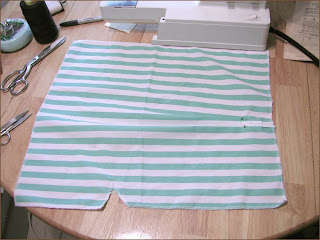 At the crotch, It had me cut to a marked place from the flap and then fold that line over onto its mate. Whenever I am told to notch something, I always reinforce that corner with a stitched line. 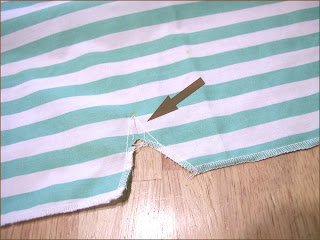 I've had so many garments in the past just put me in tears because a very stressed corner began to ravel. Yes, I have learned my lesson.
I am then told to fold under the left side (which is on top) 1/2" and stitch that to it's matching right side. 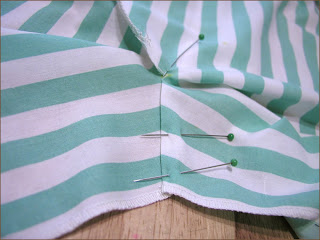 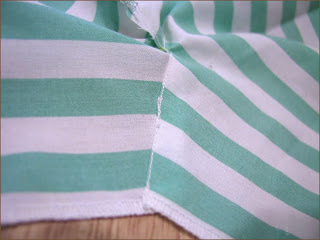 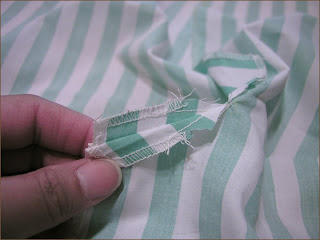 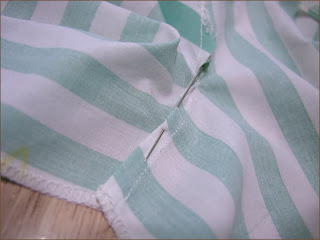 This was a good chance for me to practice my edge stitching. Well, I'll blame the bulky thread for the horrible look of this stitch. After that was done, I then instructed to flip the pieces over and trim the seam allowance (SA) of the part sandwiched between the fabrics then fold the other SA that was on top beneath and stitch from the top.


Now, I said this in modern jibber jabber, try getting the gist in vintaease. It's basically an underneath flat felled seam (I'm sure there's a name for it, but I don't know it). 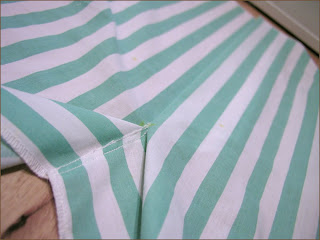 I stitched that part and now its onto the fly!
Because I overlocked the edges of my pieces, some of the instructions became moot. 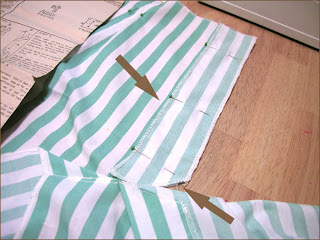 One being my need to fold under and stitch the outside piece of the fly facing. I also could have done without stitching the part of that facing when I sewed it. It would have decreased the bulk, but it's not that bad. Then I was told to line up the top part of the undies, which mind you, was already connected to the lower part, and stitch them according to the markings. UCG! 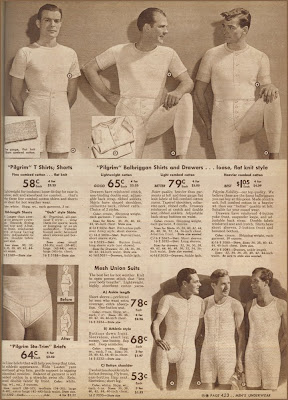 This is why I should have taken notes on the first pair. I did the exact same things wrong on this pair and I was unhappy with the finished look of this one hair-pulling seam. It's bulky, knotty, and there are too many start and stop points. I *hate* that. I really do. It's an esthetic thing with me. I mean, really, who is going to look between the crotch of a man's undies? Other than now, I mean? 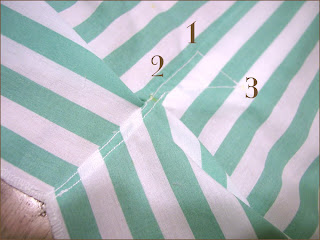 Well, because I would not have been happy with myself if I didn't correct it, I ripped it all out and did it my way, (1) lining up the front fly first and pinning it in place, then (2) from the top of that main stitch (over the actual crotch stitch), in one pass I sewed both the fly securely in place, AND the first pass of the flat felled seam. I flipped the undies over and pilled the SA under like before then (3) from the top of the fly seam I did one pass, making a pivot and down the side to the end of the crotch seam. *Ah* much cleaner.

'Lot of work, right? I think its because this touches the skin that so much effort goes into construction. This was also great practice for me to work on front fly construction, which I don't do much of because I'm just a sucker for a hip button placket.

Well, in any case, this concludes part one of the undies, and I'm glad. I recall the rest being a cake walk. More fun than anything. I hope that's the case, although I do feel rightly satisfied making this piece of construction work.